Last Bite Is Proud To Offer A Pollinator And Bee Safe Mosquito Control Trap That Is Environment Friendly.

Introducing the In2Care® Mosquito control trap, the latest in environmentally safe mosquito control. While advances in traditional mosquito control have dramatically reduced impact on non-target pests and pollinators, no treatments have been able to guarantee their safety.

The In2Care® Mosquito control trap has literally changed the game!

As the first trap to use a biological control agent to kill mosquitoes, In2Care® deploys an US-EPA-approved fungus that kills the mosquito several days after infection, even preventing disease transmission. All this with absolutely zero impact on the surrounding environment.

At Last Bite, we are committed to eliminating any and all mosquitoes, while minimizing negative impact to the surrounding environment. It’s for this reason that we’ve added the In2Care® Mosquito trap to our array of treatment options. 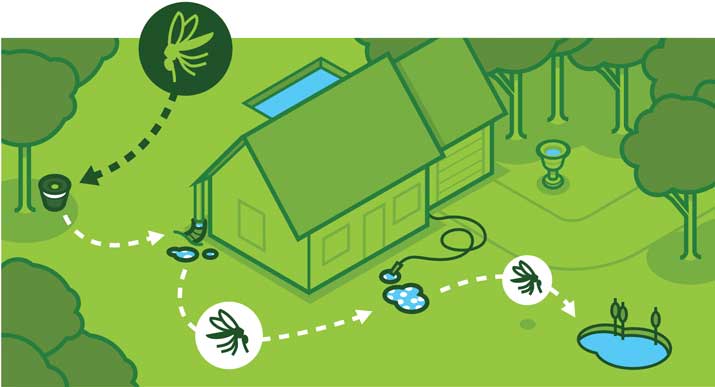 How Does It Work?

The In2Care® Mosquito control trap is made of durable plastic and uses water with an odor lure to attract egg-laying Aedes mosquitoes. Once inside, mosquitoes contact the specially treated gauze near the water surface and get contaminated with a larvicide and a fungus. We exploit the fact that Aedes like to divide their eggs over multiple sites; by letting them fly out of the Trap whilst carrying larvicide on their legs. They transport the larvicide and contaminate several breeding sites around the Trap. In this way, we can kill larvae in small and hard to find breeding sources. The mosquito also gets infected with an insect-specific fungus that kills her before she can spread disease.

A few facts about this breakthrough mosquito control treatment:

Why do we see a lot of mosquitoes after a heavy rainfall?

Aedes mosquitos can lay many eggs around a yard that can remain dormant for many months while waiting for water. Once the rains come, you can get a blooming effect in that many of the dormant eggs will hatch and lead to biting adults. In2Care Traps can control this population increase, however because of its delayed effect, it may take a couple of weeks to again reduce the population. A one-time chemical application may be needed as well as some customer education of the process.

Will a lot of rain reduce efficacy?

Rain will not reduce efficacy. PPF is very potent and active at concentrations of only 10 ppb. The water in the trap will contain enough PPF to kill mosquitoes even when rain dilutes the content: results show it to still be effective at 2000-fold lower concentrations. It is very important to keep the gauze dry.

Will it work on other mosquitoes?

The In2Care® Mosquito Trap is designed and EPA labeled for the control of Aedes aegypti and albopictus, mosquito species(day biters)that are known vectorsof the Dengue, Chikungunya and Zika virus and breeds typically in (man-made) containers. However, although not specifically labeled for other mosquito species that also usethese types of breeding places,some Culex mosquitoes will also be attracted and impacted by the Trap. The dissemination/spreading effect of the larvicide, however, is specific for the Aedes mosquito.

How come I still see mosquitoes?

Besides the delayed effect of the In2Care trap, there may be mosquitos that fly into the In2Care control zone from other areas. This is especially true of Aedes mosquitoes, which can travel over 200 yards to find a blood meal and breeding place. If they enter the trap, they will die within 8-10 days and will also spread the growth regulator.

I have dogs. Does it need to be anchored?

If the unit will be placed in an unstable area or is susceptible to winds and other animals knocking it over, stability can be improved by fixating the Trap into the soil using ground pins (that can be added to the interface). See our video: https://youtu.be/BcUzoIiFLcI Weights adhered to the bottom of the trap may also be used if needed. However, a determined dog may get into the trap or knock it overso some efforts may be needed to keep this from happening.

Can the product be used indoors?

Our product is EPA approved for outdoor use only. Additionally, the Aedes mosquito will most likely not often seek for breeding sites indoors. Since there are less standing water sources available and the environment is often cooler due to air conditioning.

The active ingredients in our Trap are not toxic to birds or mammals. We make use of a biological fungus that is only toxic to insects. This larvicide is approved by WHO to be used on drinking water and specifically targets mosquito larvae. In the low concentrations used, this product is practically not toxic. Further, the container itself is attractive to mosquitoes not beneficial insects. If exposure is suspected consultthe SDS and call 0015127712893.

What about fish such as in koi ponds?

The growth regulator portion of the active ingredients can be toxic to fish in high doses. However, it is almost impossible to have mosquitoes transfer enough product to a typical pond to harm fish such as koi. The only way such an exposure could happen is if the contents the entire bucket were to be emptied in the pond. Even then, the harm to fish is remote.

Will it get into ponds/lakes?

If by any chance, water or runoff from the In2Care® Mosquito control trap were to end in a pond or lake, the active ingredients will not cause any effect on the local wildlife or flora.

Is there any effect on toads or frogs that might jump into the trap?

There is no effect on frogs or toads that jump into the trap, as the activesare not toxic against them. We have experienced before that frogs that jumped into the trap wetted the gauze on the floater while trying to jump out (and thereby bumping t against the floater). There is no easy solution to prevent frogs from enteringthe traps unfortunately. We have designed the opening between the trap lid and container such that we get optimal mosquito entry. If we make this space smaller or add material that can block frogs etc, we will also limit how many mosquitoes will get attracted and enter the trap. In case there is a problem with frogs getting in, perhaps you can try placing the traps in locations with fewer frogs present? For example, in more elevated places to try avoid animals entering the traps.

Where can I buy the Trap online (USA)

The In2Care Mosquito Trap is not available online, as professional servicing is needed. You will be contacted by our distributor in the United States (Univar), to connect you with the right experts in pest control in your area, that can offer you this service.

No, this product does not trap mosquitoes. It acts as a dissemination unit. Mosquitoes will lay their eggs inside the water-filled units when sitting on the powdered gauze. They will be contaminated by the larvicide and fungus powder. They will fly out of the Trap and spread the larvicide that sticks to their body to surrounding breeding sites when laying more eggs. The fungus will kill the mosquitoes after a few days.

How long will the trap last?

It is recommended to replenish the water in the Trap together with the new refill every 4 weeks. The Trap is designed so that rainwater automatically fills it in the period between refills. However, during dry periods or dry areas, it might be necessary to add water every 2-3 weeks. This can be done without removing the lid, by gently pouring water on top of the lid.

Generally, sprinklers are not an issue as it aids in keeping the In2Care trap at the recommended water level. However, sprinklers pointed directly at the trap (almost horizontal spray) may get the netting inside the trap wet, which will reduce efficacy. Vertical rainfall/sprinkler water entry into the trap is not an issue.

How long will it take to work?

In2Care® Mosquito Trap will take approximately 2-3 weeks for results to be seen, as the next generation of mosquitoes are affected.

Mosquito adulticide - Yes, the Fungus spores are an organic adulticide. Mosquito larvicide (Pyriproxyfen(PPF)) - No PPF is not an organic larvicide. It is an EPA-registered juvenile hormone analogue; a chemical that mimics a specific natural hormone involved in the growth and transformation from larvae into adult mosquitoes. In this product PPF is used in very small amounts (0.35 gram every 4 weeks). It requires less than 10/ppb to affect the water source making it a very “low impact” chemical. Due to the exploitation of the Mosquitoes skip-oviposition behavior, where the PPF will effectively be spread only to target area’s (other cryptic breeding sites) via the mosquito, no chemicals are unnecessarily spread in the environment. This makes it harmless to bees and other beneficial insects.

Is there any data on what is the largest body of water that an infected mosquito can effectively contaminate to have the pyriproxyfen be effective?

Aedes typically prefers small artificial containers for breeding. They do not breed in ponds or pools of water. From experiments in the lab we know that a single mosquito can effectively contaminate water bodies of 5 Liters (1.3 gallon). Pyriproxyfen dissolves in the water and is effective in concentrations of just 10 parts per billion. In the field, there will also be accumulation of pyriproxyfen from multiple contaminated mosquitoes over time. Aedes prefer breeding sites where mosquito larvae are present (that emit a specific smell) so you will have several mosquitoes visiting the same breeding source and spreading pyriproxyfen. From field studies in the Caribbean we learned that even large rain barrels could be effectively treated, probably due to this accumulation effect from multiple mosquito visits.

Early Bird Special Save On 2022